Lil Nas X is in the process of promoting his upcoming album in a very unconventional way.

The “Old Town Road” rapper and the company MSCHF have collaborated on a limited-edition Nike Air Max 97 with Satanic stylings designed by Nas X, to commemorate his new look and new music.

The rapper has had trouble finding his footing since coming out as gay in 2019, and his following projects receiving lackluster reviews.

On Friday, Nas X debuted his video Montero, which features Satanic symbols, imagery, and references to the Garden of Eden. After the song’s release, he tweeted an open letter to his 14-year-old self, apologizing for coming out and explaining why he did it.

The opening of the music video for “Montero,” which is Nas X’s real name, includes a  message similar to his social media post and details the song’s meaning.

“In life, we hide the parts of ourselves we don’t want the world to see,” Nas says. “We lock them away. We tell them, ‘No.’ We banish them. But here, we don’t. Welcome to Montero.”

The backlash over the song and the shoes was, not surprisingly, swift and forced Nike to immediately dissociate itself from Nas X and MSCHF.

Nike released a statement that read, in part; 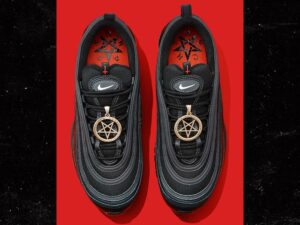 “We do not have a relationship with Little Nas X or MSCHF,” Nike wrote. “Nike did not design or release these shoes and we do not endorse them.”

The company that did, however, create the shoes is MSCHF.
Established in 2016 by West Point drop-out Gabriel Whaley, since its inception, the Brooklyn-based business has become known for its viral projects and products.
But this isn’t the first time that the company has gained attention for delving into religion and the supernatural. 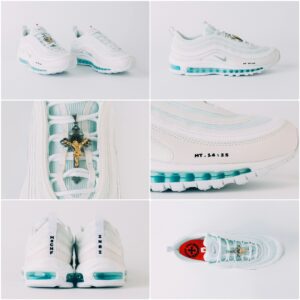 In 2019, the company went viral after debuting a line of “Nike Air Max 97 MSCHF x INRI Jesus Shoes.” Each pair of sneakers contained 60 ccs of holy water sourced straight from the River Jordan and injected into the soles, a crucifix, and a Matthew 14:25 inscription. They were also scented with frankincense, which was said to be given to the baby Jesus by one of the three wise men.
The shoes originally retailed for $1,425, but due to the limited quantity, the sneakers are now available for $3,000, if you can find them.
For those who are interested, the new “Nike Air Max 97 MSCHF x Lil Nas X Satan Shoes” will drop Monday for $1,018, and will include a pentagram pendant, a reference to Luke 10:18 (a Bible verse about Satan’s fall from heaven.) The shoes will also contain a drop of human blood in the sole, that was taken from each member of the MSCHF team.
Well, Lord have mercy. What do you think about the shoes? Will you be rocking a pair?
FacebookTwitterPinterestLinkedinEmail

Armed and dangerous: Former detective on the run after killing 3 in Austin, police say