Native Houstonian and MLB star, Carl Crawford, is getting the recognition he deserves right in his hometown. Crawford is known for his athleticism, but his alma mater wanted to demonstrate their appreciation for his generosity and compassion for the community.

Crawford was honored during a ceremony on Friday by Northside High School, formerly known as Jefferson Davis High School, by naming their new baseball field, “Carl Crawford Field,” after him.

The ceremony was filled with family, friends, student-athletes, and special guests, including Brian Peters and Astros Broadcaster Todd Kalas.

It began with the traditional first pitch by All-Star Michael Bourn to Cory Jai Crawford, Carl’s nephew. Cory Crawford (of Burns Original BBQ) and Carl’s brother, emceed the ceremony, where their former principal, Emily Cole, venerated Crawford for his generosity and zeal for giving back to his community. 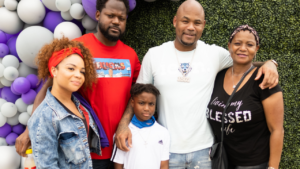 Crawford’s former coach, James Garcia, also spoke about the years of hard work and dedication put in on their baseball team as he would always put in the most hours; attributing his work ethic and commitment to the man he is today.

The guest of honor gave final remarks, speaking about his love for Northside High School, all his memories there, and thanking those who helped pave the way. The ceremony concluded with a ribbon-cutting ceremony to the all-new “Carl Crawford Field.” After the ceremony, Crawford participated as Northside High School honored preselected student-athletes for being graduating seniors. Burns Original BBQ provided food for everyone in attendance as the ceremony came to a close.

Millions of Americans are facing hunger this holiday season