The D-O-Double-G is making waves once again, this time out of the studio and into the corporate side for the iconic Def Jam Recordings.

Def Jam announced that Calvin Cordozar Broadus Jr. – professionally known as Snoop Dogg – a global superstar, entrepreneur, and cultural icon, is joining the label as Executive Creative and Strategic Consultant, a new role that will allow him to strategically work across the label’s executive team and artist roster.
With an immediate focus on A&R and creative development, Snoop will be based in Los Angeles and reporting to Universal Music Group Chairman & CEO Sir Lucian Grainge and Def Jam interim Chairman and CEO Jeffrey Harleston.
“I have had the pleasure of knowing and working with Snoop Dogg for more than 20 years,” said Harleston. “Not only does Snoop understand what it takes to be a successful artist, he is one of the most creative, strategic, and entrepreneurial people I know. Snoop has a genuine passion for the label and the culture, and we are all excited to have Snoop join the Def Jam Family.”
Founded by producer Rick Rubin in his dorm room at NYU, and formally run by Jay Z amongst others – Def Jam is often considered one of the definitive institutions for global hip-hop, and its impact is global with divisions in Africa, South East Asia, France, Japan and most recently in the U.K.
With an institution this significant to the history and culture of Hip Hop, Snoop Dogg, a legend himself, seems like the perfect fit. 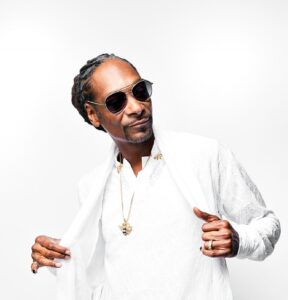 With his work as a media personality and artist with over 30 million sold albums globally, 19 studio albums, over 20 GRAMMY nominations, and numerous #1 spots on Billboard Charts across the world, there’s no doubt that Snoop Dogg will lead Def Jam Recordings to the next level.
FacebookTwitterPinterestLinkedinEmail