Lil Baby beat out many to become BET’s Best New Artist Of The Year, but word on the street is that the “Drip Too Hard” rapper is out here paying for dates.

The self-proclaimed “pro-rider” posted a series of Tweets sharing her night with Lil Baby and says she had to tell her fans because it was just that good!

“The best d*** I ever had came from a millionaire who didn’t say more than two full sentences to me. He literally beat me to the mattress soon as I got in the room,” London tweeted.

London also revealed that she was so drunk in love that she forgot that she signed a Non-Disclosure Agreement. She posted screenshots of a conversation with her publicist that read, “You signed an NDA?” to which London replied, “I’m drunk, I’m probably about to get sued tomorrow.” 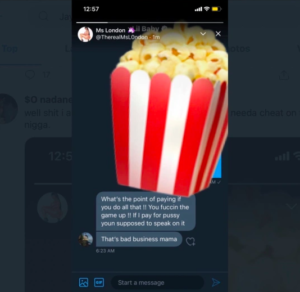 Lil Baby has not responded and neither has his on-and off-again girlfriend, Jayda Cheaves.

However, his baby mother Ayesha had some harsh words for the rapper.

“Don’t be willing to give these h*** one night of selling p***y more than you’re willing to supply your own child to eat with a month.”

When will these rappers learn, haven’t they heard of Karrine Steffans?

Will Levar get another shot at becoming new Jeopardy host?

Merriam-Webster’s ‘word of the year’ is…….

by Editor-in-Chief
Join the Conversation

3 ways to DIY your Valentine’s Day

Dr. Bernice King reveals facts, photos, and quotes of her father during MLK Day and weekend