It would be an understatement to say that 2020 has been a hard year for everyone, and even Megan Thee Stallion is in agreeance that we could all use some good news.

The Houston native has been in the spotlight in recent months after allegedly being shot by rapper Torey Lanez, but the “Girls in the Hood” rapper says she is ready to put all of that behind her and focus on the good that’s happening in her life.

And Thee Stallion did just that, by announcing the title, ‘bomb ass’ artwork and release date of her debut album on social media to her 17 million followers.

“Hotties, I first want to say thank you for riding with me, growing with me, and staying down with me since my first mixtape Rich Ratchet! Through this rough ass year, we’ve all been having I felt like we could all use a Lil bit of good news. So with that being said MY OFFICIAL ALBUM “GOOD NEWS” IS DROPPING NOVEMBER 20TH PRE ORDER WILL BE AVAILABLE TONIGHT #GOODNEWSMEGAN”

THROUGH SUCH A ROUGH YEAR I FELT LIKE WE COULD ALL USE A LIL GOOD NEWS ? MY OFFICIAL ALBUM “GOOD NEWS” DROPS NOV 20TH ! Pre save tonight @ midnight #GOODNEWSMEGAN pic.twitter.com/7mDZLP1cQ6 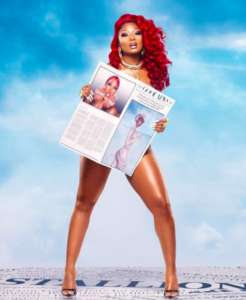 But listen up Hotties, as Meg calls her fans, there are only 1,000 tapes available for pre-order, so we encourage you to head over to her site and get yours while you still can.

TAKE A LOOK AT THEE STALLION MERCHANDISE BELOW

Cardi B attacked by fans after tweeting about $88K purse purchase

The women leading the fight against COVID-19

“We Are Closed.” Are people lazy? No, eyes are beginning to open