Tina Knowles Lawson said, “I got time today.”  The 66-year-old Houston native released a scathing response to critics who called her daughter Beyonce for not speaking out amid the SARS protests in Nigeria.

SARS is a special branch of the Nigerian police force that was created in 1992 to deal with crimes associated with robbery and firearms. Over the last decade, the organization has allegedly used their power to incite fear through torture, illegal activities and unlawful killings of innocent men, women and children.

Over the recent months, protesters have been killed and brutally beaten while protesting for an end to the SARS task force.

Many celebrities have used their platform to show support, but Beyonce continued to remain silent.

Beyonce has been very inclusive of African culture and imagery in her music and videos throughout her career. In 2019, the “Mood 4eva” singer went to Africa and shot a full-length movie “BLACK IS KING” to parallel the release of Disney’s The Lion King. The 24-time Grammy Award winner enlisted all African dancers, singers, musicians and producers to develop the project.

So, why momma Tina so mad?

In the midst of the protests, Tiwa Savage, who served as a featured artist on the “BLACK IS KING ” project took to social media to call out Beyonce.

“I was involved, recently, in a project that I was so proud of, like as an artist I was so so proud to be called to be among the few people that was involved in this project. It’s called ‘Black Is King: The Gift album.’ But I want to use my platform right now to call Beyoncé and the whole team that reached out to a lot of Nigerians. Nigerian artists, Nigerian producers, Nigerian video directors, dancers, creatives,” said Tiwa.

“I’m calling on Beyoncé and her team, the same way they used their platform… to elevate and to show the world that Black is King and how beautiful Afrobeat and Africa our culture is. I want them to please use their voice and their platform right because the same country that birth this genre is on fire right now.”

Following Tiwa’s post, Beyonce posted a message of support on her Instagram page, but Beyonce’s mom felt the damage was already done.

When Ms. Tina caught wind of the shade, she lit social media on fire with a very lengthy response.

“No matter what my daughter does she is scrutinized and torn apart,” Knowles- Lawson said.

“She Makes a record and uses all African artists, producers, writers. She is criticized because she didn’t get artists from every country in Africa, there are 52 countries! Then she makes a film that by the way, she doesn’t profit a penny off of because she spent every penny in the budget on making something that celebrates our heritage! What profiting off of you did she do? She made art!! She is an artist! That is what artist do. She is not your political leader and not your whipping board.” She continued.

“Someone that was on the last project who BTW is in constant contact with her team decided that instead of contacting her team and asking her to post to assist in spreading the word. I am appalled that They would get on social media and do it!! Why not ask the people you are dealing with all the time????? On her team!! I don’t understand that !!! I am sure at the time she was not thinking straight because of the trauma that the country was facing but come on!!!!!!”

Knowles- Lawson also said that the critics bullied her daughter to post the message in support of the protest, but she will no longer be bullied and will fight back.

The posts have since been deleted from Momma Tina’s Instagram, but the screenshots are still floating around the internet. read entire posts below: 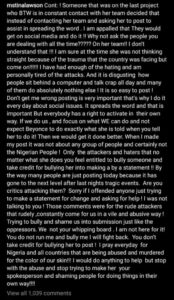 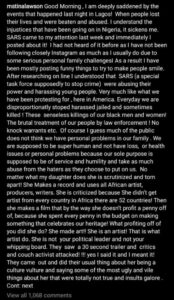